I like hosting and attending meetups, and usually have a side project or two on the go. I really enjoy running workshops and giving talks. In particular, I love Training from the Back of the Room, and I secretly(ish) try and make every talk I do into somewhat of a workshop. I like asking people to Do Stuff to help them learn a bit more. I read and think a lot about teaching and learning, and keep a checklist of sorts that I use whenever making a new workshop.

I enjoy sharing what I’ve learned from all the mistakes I’ve made: helping people learn new things, or get better at things they already known. I write about it, speak and facilitate workshops at meetups, conferences, and at clients. I do a few talks and workshops a year, often with a friend who I can learn something from.

From October 2012 until July 2018, I was one of the organisers of the Cape Town Front-end developers meetup group. The group hosts monthly events such as talks and workshops.

With a lot of help from some friends, I started the Cape Town chapter of RailsBridge: an organisation that offers free workshops on Rails, Ruby, and other web technologies for groups of people that are underrepresented in tech. From April 2013 until March 2018, I helped organise and mentor at the quarterly workshops.

Near the start of 2018 I realised I was overdoing things a bit and taking on too much. I decided to take a break from being in an organiser role, and focus more on giving talks and workshops. That didn’t stop me from doing some mentoring at ColorCode (a consistent, inclusive, community for learning to solve problems with code) every few weeks, though!

Here are some recent talks and workshops that I’ve done.

I’ve been doing speaking and workshops since October 2014. Have a look at my community archive for the full list. 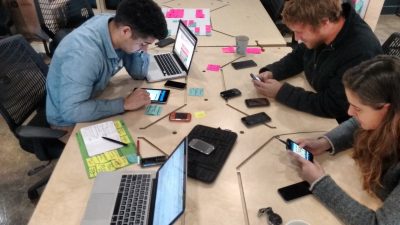 I think that a great way to test the robustness and resilience of your site is to play with it on lower-end mobile devices. I joined the Open Device Lab community by starting the Nomad Device Lab in September 2012. It’s a shared pool of internet-connected devices, and is free to use. Every few months someone will contact me through the site and I’ll go and sit with them, usually for a half a day. We test their projects across a range of devices, and discuss ways of improving the front-end performance and user experience. In November 2016, the lab was featured on Smashing Mag: Where Are The World’s Best Open Device Labs?. The lab closed its doors in February 2019.

I’m a big believer in building things that are Future Friendly, so I made a tiny site to join the call to arms. You can read more about the technical details of what that means on my How I Do Things page.