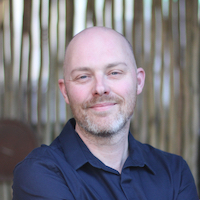 In Cape Town in South Africa he worked as a front-end developer and UX person (as an employee and as a consultant) at dev shops, design studios, and more. In January 2020 he moved to Wellington in New Zealand and joined Totara Learning as a front-end developer, specialising in accessibility. In August 2021 he started a full-time permanent position at Xero as a Technical Digital Accessibility Analyst.

He enjoys sharing what he’s learned from all the mistakes he’s made: helping people learn new things, or get better at things they already known. He writes about it, speaks and facilitate workshops at meetups, conferences, and at clients. He does a few talks and workshops a year, often with a friend who he can learn something from.

He’s on Medium as @maxbarners, on GitHub as SteveBarnett, on LinkedIn, and on this site as, erm, himself.

He loves open source so he keeps lots of things on GitHub like accessibility demos and tests, notes-to-self on the WebAim Million, retrospective templates, and checklists for UX and accessibility.

You can drop him a line at [email protected]. Sometimes he writes things about himself in the third person and it feels a bit odd ¯\_(ツ)_/¯.