Here’s a quick round-up of how I try and write accessible HTML. I use a handful of tools that do similar things from different angles. It’s a mix of command line things, CSS, and my brain.

I use a mix of tools because I try and be a bit pessimistic about how good I’ll be at fixing everything. I want to give future-me several chances to catch the things that past-me overlooked or missed. 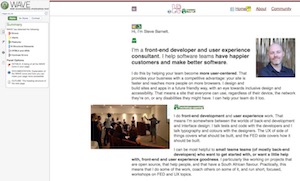 Here are the three big steps I do when working on something running on my machine.

See below for more detail on the CSS debuggers and CLI tools. For things that aren’t running on my machine, I use:

I use my fork of Heydon Pickering’s Revenge.css and the warnings and errors files from a11y.css to highlight where I’ve made HTML mistakes.

In the (Jekyll-flavoured) header of this site, you can see that I include some extra CSS files: a11y-en_error.css, a11y-en_warning.css and revenge.css. These add high visibility (especially in revenge’s case!) borders, backgrounds, and words to things that are inaccessible. It’s very difficult to miss them!

Where appropriate, I also add a component-name.test.css that has more specific rules.

I use Pa11y. It can be quite verbose and a bit intimidating, though. For a full check, I run

(using -s lets you set the standard you want to use). I usually run just the error check first (ignoring notices and warnings), like this:

I’m still figuring out the best way of integrating this with other tests and things. I want to use Gulp aXe web driver as part of the build process in my next project. aXe has a different approach to pa11y. Where pa11y is loud, aXe is quiet: they aim for no false positives, so they output is much quieter.

How do you test your stuff for accessibility? And if you don’t yet, what’s the first thing you’ll test? Putting a (publicly accessible) URL into WAVE is a great, low effort, first step. Here’s this site put through the wringer. When starting work on a new site, I like to run WAVE and see if there’s one error that I can do a tiny, quick, fix for.