One of the things I’ve been inspect-and-adapting over the past few months is my Kanban board at work. Here’s what I’ve done and why.

Here’s what my board looks like now, with blank stickies for sizing reference. 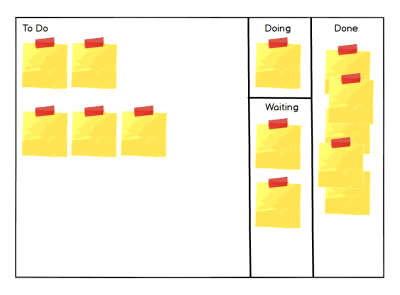 I found I was having a few problems:

The first thing I changed was to make my Doing column a box big enough for just one sticky. An easy way to limit the WIP to one (as long as I use my board properly!). Doing that also meant I could use the rest of the column for Waiting. I've never been happy with a Waiting column to the left or to the right of Doing. Both feel kind of not quite right.

I don’t do anything with my Done column at the end of a sprint except clear it out, so that became just one sticky wide, leaving lots of space for the To Do block. Since it’s a big bigger I can arrange stuff in swim lanes properly too.