On Thursday 5th February, I gave a short talk at the Cape Town Scrum Users Group about RailsBridge. 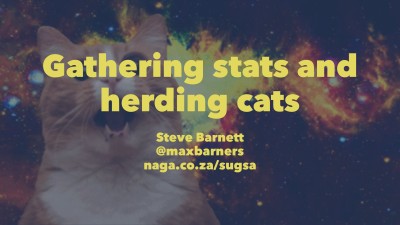 My slides are up on Speakerdeck. I talked about RailsBridge itself (the upstream organisation and how our Cape Town chapter came to be) and the Cape Town team's focus on Continuous Improvement. I talked about the various methods we've used to gather feedback (and how successful or not they were), what feedback received, and what we did with it (lots of things!).

I'll be giving a remixed version of this talk at the Cape Town Ruby Brigade in March, where I'll focus more on the Ruby and Rails bits, and the curriculum.

(Yes, me doing all this Ruby stuff is slightly odd, since where I work now (Praekelt Fuondation) is a Python shop. Vumi, for example, is all Python. ¯\_(ツ)_/¯ )