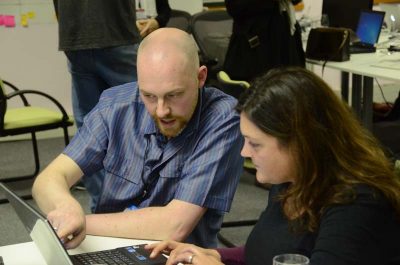 Becoming an excellent user-centered team doesn’t happen overnight. Old habits die hard and figuring out what users need (rather than what they say they want) is tricky. I help teams find and make the small changes that will make a big, lasting, impact to help them in their journey.

I also help teams set themselves up for making continuous improvements in future by focusing on where we want to improve rather than what we might be doing wrong.

I work on the front-end of projects across various tech stacks, building templates and front-end Style Guides. I work with Rails, Django, Node, .NET, Laravel, WordPress, and static site generators like Jekyll (which powers this site). I use templating engines like ERB, Jinja, Handlebars, Razor, Blade, Liquid. I also work with front-end JavaScript frameworks like Angular (a fair bit), and React and Vue (a little, but looking to do more).

I work best in the view layer. I write and edit code to use APIs and make the most of the framework, but I tend not to touch models or controllers. I focus on the HTML and CSS (and UX stuff), and add small amounts of JavaScript (sometimes ES6, usually sprinkled using Babel) where necessary. I use:

I look for where small changes in process can make the biggest difference, and pick UX activities or deliverables that match the need.

For each UX deliverable, I like to use the lowest fidelity that provides good enough results. That means a mixture of sketches (I have fancy pens), wireframes (usually in Balsamiq because I find it’s quite fast), or clickable prototypes (usually in HTML, CSS, and JavaScript, using something like Bootstrap for speed).